LED applications have grown by leaps and bounds in the past few years. At first, LED heat dissipation was not a problem, as low-power LED was used at that time. However, with the use of high-power LED, its heat output has been greatly increased. In order to ensure the high efficiency, reliability and long life of LED, the heat dissipation problem must be solved.

The basic parameters to measure LED performance are as follows: 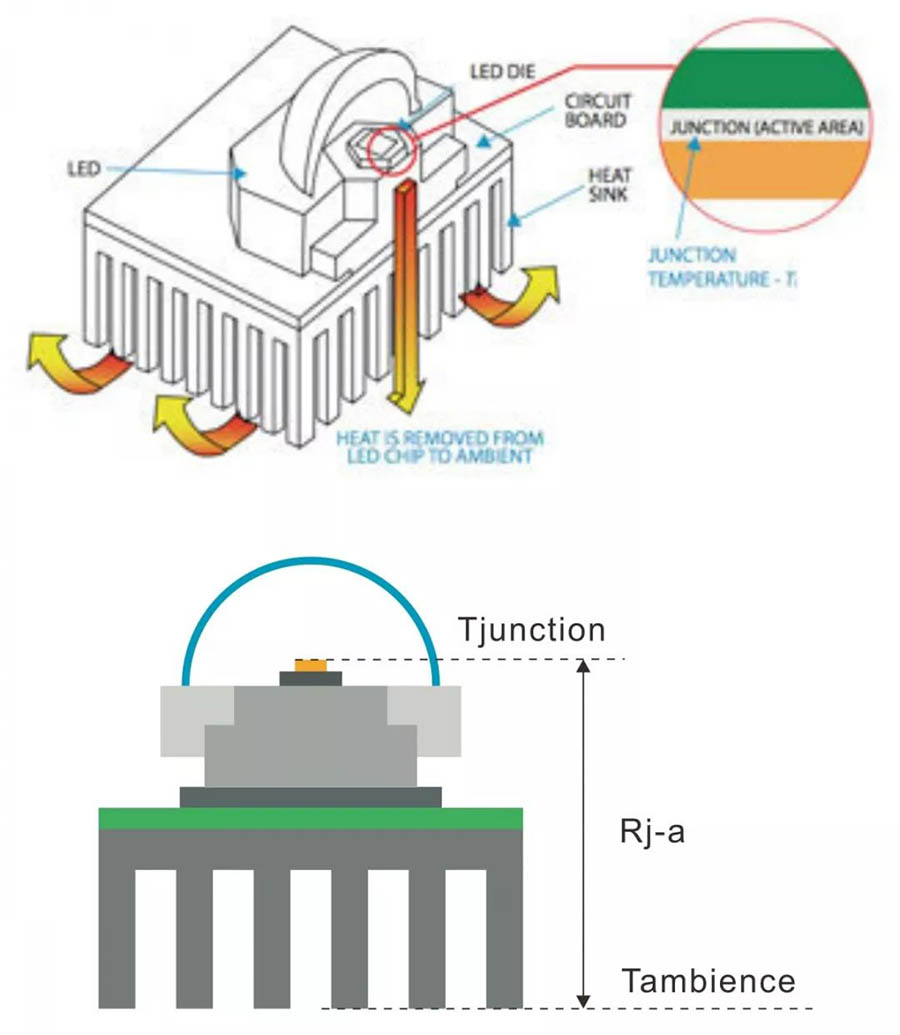 Thermal resistance is defined as the ratio of temperature difference to power, reflecting the efficiency of heat transfer between materials/components. Its definition formula is as follows:

When the LED light source is powered on, it will generate heat, while the junction temperature must be kept at a low level as far as possible. The term "node" refers to the p-n junction inside the LED semiconductor chip. The recommended maximum allowable temperature can be found in the parameter table of each LED product.

Because the temperature at the junction is the highest in the whole LED, it is a key index to estimate the LED life. From the perspective of thermodynamics, node temperature is affected by many factors, such as cooling and cooling system, environment, interface material and so on.

The calculation formula of node temperature is shown as follows:

When the node temperature rises, it will also lead to obvious color drift towards the short-wave direction of the spectrum, which has a great impact on the "white light" LED light source. Most so-called "white light" leds actually emit blue light, which is converted into white light by phosphors. When the temperature rises, the blue light will drift towards the red spectrum and change its interaction with the phosphor powder. As a result, the final color of the light will change.

The last major parameter affected by the LED thermal management system is lumen output. Increasing current can improve LED lumen output, but high current can also lead to increased heat output. Therefore, when determining the current value, an optimal balance must be chosen between system performance and service life.

"Half an hour illumination method" to measure junction temperature

The specific measures are as follows:

Choose a place that is not disturbed by outside light, preferably at night, and turn off other lights.

3. Keep the position of the lamp and illuminometer unchanged and the lamp will continue to work.

4. After half an hour, read the illuminance value here again and record the reading as "thermal illuminance".

5. If the two values are similar (10-15%), the heat dissipation system of this lamp is basically good.

6. If the two values are far from each other (more than 20%), the heat dissipation system of this lamp is questionable.

Judge the heat dissipation of LED lamps and lanterns.

Heat conduction and heat dissipation are very important for leds

The key point is junction temperature!

Touch not hot, not necessarily good.

It is recommended to use "half an hour illumination method".

The allowable range depends on the temperature curve of the chip.