What Is The Secret Of The Lamp Sample Test？

In almost all cases, the manufacturers test samples of the light source (lamp or chip) in what is called an “integrating sphere” Figure 1 , a sophisticated test apparatus where virtually 100% of emitted light from possible directions is collected and measured.

Typically, lamp samples, to establish a spec, are tested one time in the integrating sphere. However, LED chips are tested by the chip maker in the sphere but there is a second test when in final lamp form, by the lamp maker /seller. The LED lamp will always show a 25-30% lower lumen rating than a bare chip component because of losses in all the other thermal, electronic and optical parts of the lamp. Many LED lamp makers falsely promote high lumen numbers by using specs of the bare led chip data sheet itself instead of for assembled lamp. 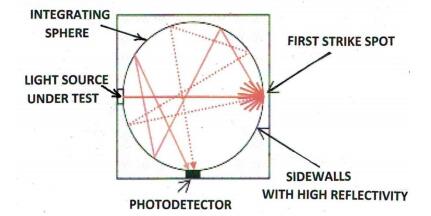 In the Figure 1 diagram, an “infinite” number of light rays bounce off all the internal sphere reflective surfaces so that almost all the emitted is light collected and measured at one point. This is an ideal arrangement. In actual practice, it is impossible get all of the emitted light to a specific target.