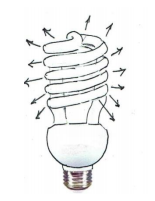 CFLs, such as shown in Figure 3, brought longer life and much higher lumens-per-watt specifications. So it has seemed to make sense to simply screw in CFLs where incandescent had been used before about 1995—again using large reflectors to collect and redirect the light to the target area. It all seemed so simple. One could confirm in a few seconds that four 25-watt CFL’s ( 100 watts ), with or without a reflector, could put more light onto a subject scene then a 100-watt incandescent with large flood reflector—but the CFLs would last 6-10 times longer.

With further tests we would observe the following-----

A 100-watt regular A19 bulb with a large reflector (10 inch diameter) would put about triple the light onto a scene over one without any reflector (Figure 2) . But a CFL (Figure 3) with same reflector would typically show only about a 1.5:1 improvement. That might surprise many readers—who think a fluorescent Par 30 lamp “spotlight” can really be a spotlight.

But what really makes it almost impossible for the CFL to use any reflector effectively is the design of the CFL itself. At least in a regular incandescent lamp, the light comes off the tiny filament wire and can all be collected and redirected.

But in a coiled-glass-tube CFL like Figure 3, most of the emitted light comes off curved surfaces from various distances from one another, making it almost impossible for a single reflector to focus all the light rays. Furthermore, much of the emitted light is actually blocked by adjacent coiled-tube segments and is prevented from going forward.

So while a CFL is a more efficient creator of light than an incandescent, its size and shape prevent that efficient light from being used efficiently. That is why the published lumen-perwatt specs of the best CFLs are less than those for the newer types of very long, straight regular fluorescent tubes (such as 48 inch, 96 inch). A CFL simply does not have much compatibility with reflectors. We see many fluorescent “floodlights” sold in hardware stores and home improvement stores. But we would find that they actually do not put much more light on an area than a regular cheap A-19 LED bulb. So these are very misleading products.