A Led With TIR Lens Can Increase The Light Intensity

Figure 7 shows a simplified view of how all the light coming off the LED chip is collected and redirected in an extremely complete, and efficient way--- very similar to how light is accurately collected in the “integrating sphere” we previously referenced. 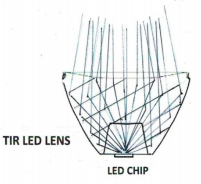 A LED with TIR lens can increase the light intensity (i.e. the lux level on the target from 4X to 10X depending pn the beam angle. A 60-90 degree beam angle, corresponding to what would be called a “flood” lamp, would exhibit at least triple the light the subject versus the same LED with no lens.

All of this means that an LED PAR lamp, with an array of its own integral “micro” TIR lenses, needs no additional external large reflector. This means an LED Par lamp, having 30-50% higher lumens per watt than any typical CFL of similar wattage to start becomes even more efficient when a proper lens is used

The result is that the SuperFLOOD and MultiBEAM LED PAR lamp, in addition to having 5 times as much life expectancy than a CFL, can put 3-4 times more light on an area as any CFL reflector combination.